Leon McCarthy, 12, was born without fingers on his left hand. That didn't stop him from being able to do many tasks. But Leon could not grasp more than one object at a time. So Leon's father, Paul, created a prosthesis, using a 3D printer. Now Leon has fingers that open and close with a flex of his wrist. "It was a do-it-yourself, father-and-son adventure," Paul McCarthy told TFK. 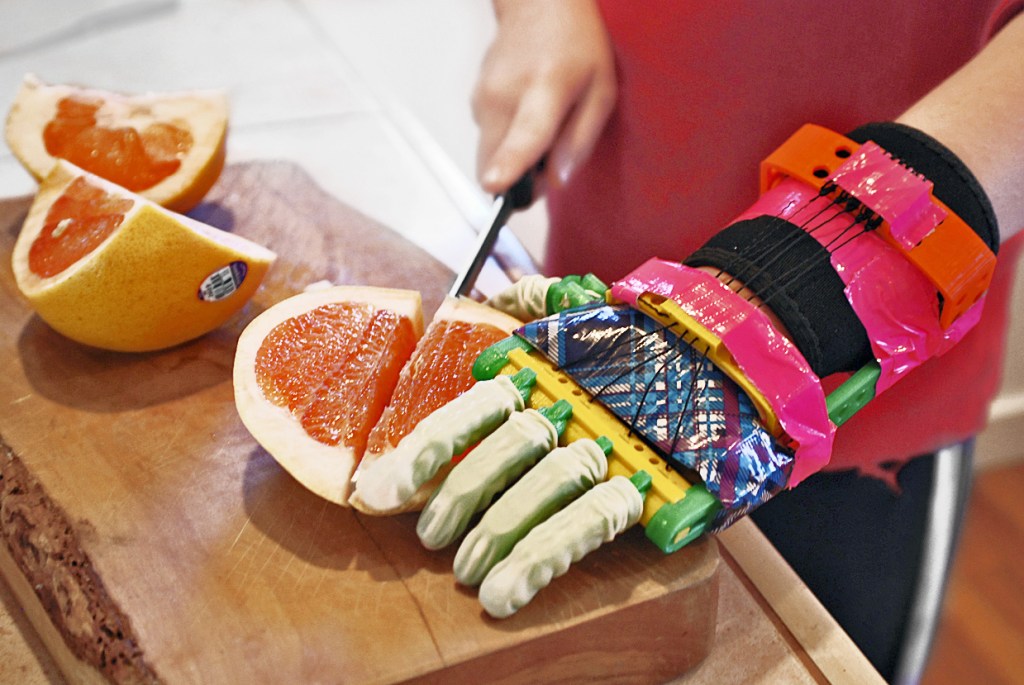 With his artificial hand, Leon McCarthy can accomplish many tasks, including slicing fruit.

When Leon was a baby, his doctor advised his parents not to give him a prosthetic hand until he was in his early teens. "The doctor said Leon should first learn to get full use out of the hand he was born with," says McCarthy. As Leon got older, his father looked into buying a prosthetic hand. It can cost as much as $30,000. McCarthy found a more affordable solution.

The McCarthy family lives in Marblehead, Massachusetts. On the Internet, McCarthy discovered a video about Robohand, a prosthesis created with a 3D printer. He downloaded the free instructions and contacted Robohand's creators for advice. They told him all he needed was a 3D printer—which costs around $2,000—and some materials.

Luckily, Leon's school had recently acquired a 3D printer. Science teacher Bill Sullivan, who got the printer for the school, offered to help McCarthy build the hand for Leon. The materials needed were inexpensive and easy to get. "They cost about $10," says McCarthy. "We used a soccer shin guard, cardboard, and duct tape."

Leon McCarthy, 12, was born without fingers on his left hand.

With his new hand, Leon can do things better. "I can help my mom more, because now I can carry two grocery bags," he says.

Leon's father has already built several hands for Leon. Leon helps design each one. He says there's one thing in particular that he wants to do with a future version. "The goal," he says, "is to be able to tie my shoelaces."