Have you ever imagined eating a meal cooked by one of the world’s top chefs? Now imagine eating that meal in space! José Andrés is already a globally known chef, humanitarian, and New York Times best-selling author. Now, he’s adding another profession to that list: he’s creating traditional Spanish paella for space travel. His meals will feed the astronauts on Axiom Space’s Ax-1 mission, the first all-private crew mission to the International Space Station.

In March, I had a chance to speak with Chef Andrés. We talked about what it’s like to create food for astronauts. Andrés is someone who wants to make connections with all types of people, and that involves creativity and imagination. It was inspiring to hear about his work. And he was funny! And encouraging: He motivates young people to work hard, dream big, and believe in themselves.

Read part of our conversation below.

Hello, Chef Andrés! I'm really happy to be here with you.

I know that you are an internationally recognized chef, a humanitarian, a New York Times best-selling author, and a TV personality. And now, you’re devising culinary surprises for space travel. That's really cool. What sparked your interest in cooking? And how did you become a professional chef?

My love for cooking was something that happened very early in my life, slowly but surely. I don't think I work as a cook. I think I enjoy being a cook, and it happens that it has become my profession.

My mother and my father were very important [to my development as a cook]. I don't have a lot of memories of going to restaurants when I was growing up. Going to a restaurant was expensive, and my mom and my dad were working-class, a middle-class family. I remember I would go for bread every day. I would get my bike, and I would go to the bakery, and I’d pick up the bread, warm out of the oven. Or I would go with my mom to buy fruit, or I would go with my father to buy fish.

I have three brothers, and we would always help in the kitchen: setting the table, bringing the dishes to the dishwasher, helping my mom. We got to love cooking because cooking was a good moment of being together. I only have fun memories of those moments.

So it was your parents who helped spark that interest?

Yes, very much. Then, as I grew up, I began learning about chefs doing very cool things. I was 15 or 16 when I began working in the summer in a seafood restaurant up north of Barcelona, on the Mediterranean seacoast. For some reason, I found myself one summer in charge of the kitchen. Not because I was prepared to be the chef, but because the other chef left. And when there’s nobody around, what do you do? Well, you can do two things. You can quit, but then nothing happens. Or you can say, “Let me take care of it. Let me see if I can do it.”

I understand that you are collaborating with Axiom Space, and that came about because of your friendship with the commander of the Ax-1 crew, Michael López-Alegría. How did you decide to work together?

I love science fiction, and I always had dreams of what it would be like cooking for a faraway planet. I love to look at the stars. I have my own telescope, and I love to watch the [International] Space Station when it passes every night through the sky.

And so I began talking to some folks at NASA many years ago. They came to my office, they saw my laboratory, but nothing really happened for different reasons. That was fine. I showed them how I work, they showed me how they work. It was fun. Sometimes, when you meet people from other fields, it’s very good. Chefs should meet astronauts and astronauts should be chefs. Architects should meet doctors and doctors should meet painters, because when we open our connections to the world, we become more creative. We need to make sure that the different fields talk to [one another], because then we can achieve much more.

So López-Alegría is a friend. I met him many years ago. I think at one moment, he was an ambassador of foods from Spain. For me, it was funny that an astronaut was an ambassador of foods from Spain. When he got back to work as an astronaut and at Axiom, he called me and said, “Are you up for this?” And I’m like, “Okay, let me think about it. Um, yes!”

Who would have said that a guy who left school fairly young, who only graduated three or four years ago—because my school finally gave me my diploma—would be putting a dish into space? This is very cool. And this is a big lesson for all of us: It doesn’t matter how impossible the dream is. If you work hard, maybe the dream is not as impossible as you think. 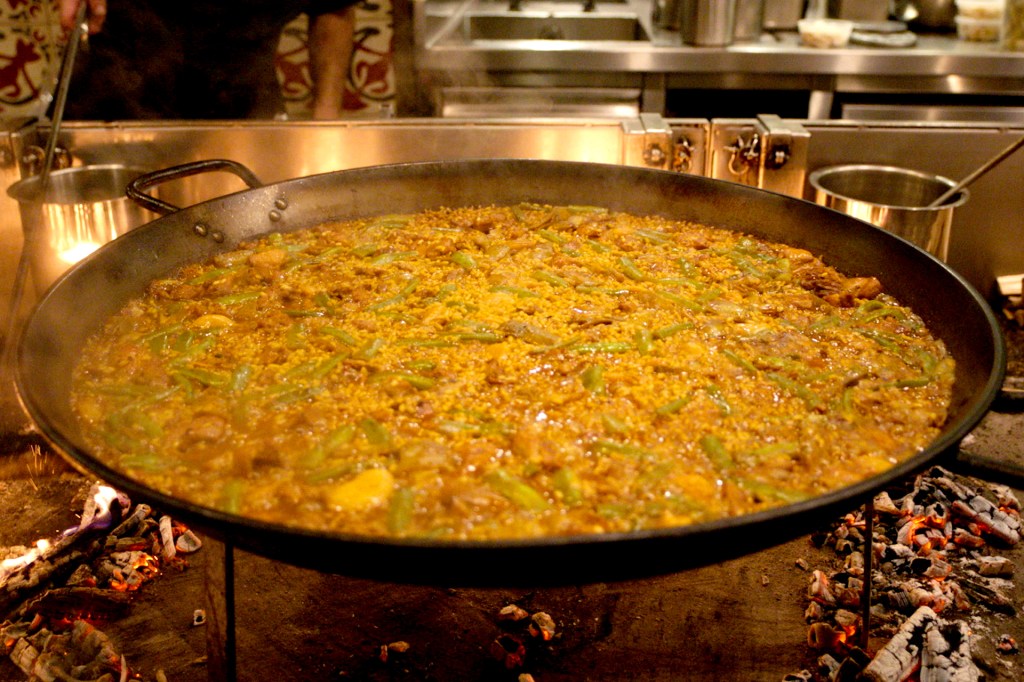 PAELLA VALENCIANA On Earth, this traditional Spanish meal is served out of a large dish for a group of people to enjoy together.

What are some of the challenges in recreating traditional Spanish dishes for astronauts? Did you have to make any compromises or changes from the original ingredients to make the food fit for space travel?

Yes. When you need to feed people so far away from the surface of Planet Earth, food safety is the most important. You need to make sure that nobody will get sick because something happens with the food, or that the food is not going to spill oil over the entire space station. Those are things that NASA has done a very good job of over the years. Obviously, the astronauts have been eating, without my help, since people began going up into space.

But for me, it was like, “Let me push the boundaries a little bit.” Everybody thinks about the freeze-dried food that goes up in space, and they put in water and rehydrate it. And this has been the way it’s been done. But for me, it was like, “Let me do it in a way that it’s a dish that is cooked, like if I was to cook it in my own restaurant, my own kitchen, my own home.” So we didn’t need to reinvent the wheel. We only had to learn from what they’ve been doing already for all these years. Take that knowledge, then bring what we wanted to do, and start understanding how some boundaries actually became opportunities.

For us, it was, “Do we cook the rice before and then put it in the bags?” But then those bags, they need to be put under very high pressure, high temperature to make sure that all bacteria will be killed and that the health of the astronaut will not be compromised. But if the food is already cooked and you put that in the bag, and then that bag goes under a lot of pressure, it’s going to become like mush. Paella Valenciana cannot allow rice to become mushy and like a porridge. And that was a challenge. 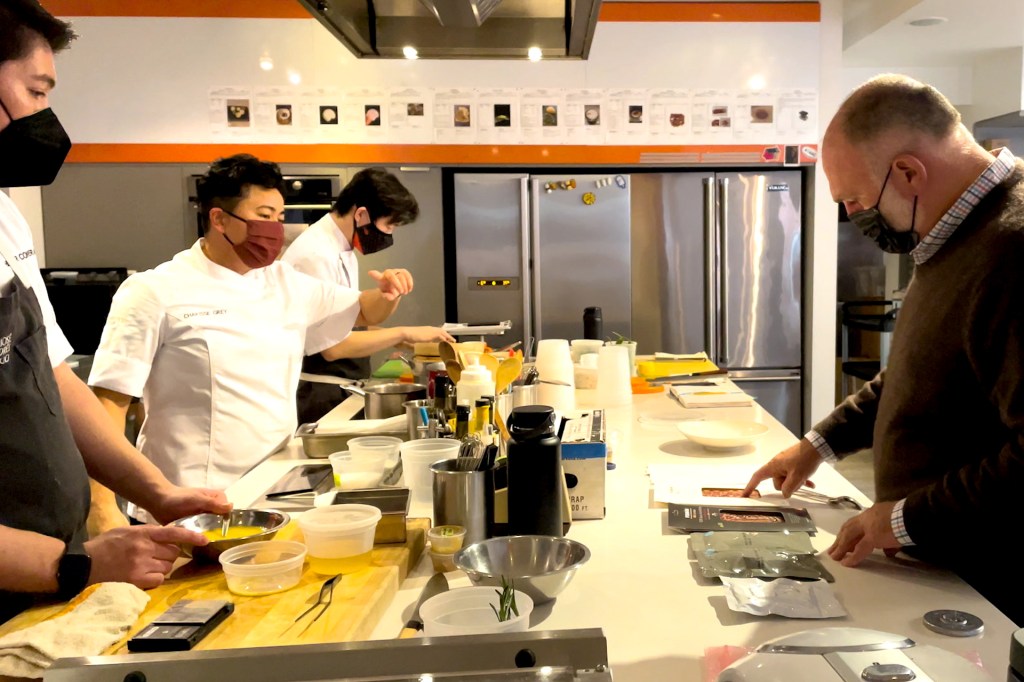 IN THE KITCHEN Chef Andrés and his team develop the meal that will feed astronauts on the Ax-1 mission to the International Space Station.

So what we did was, we put the rice in the bag raw. We found the right proportions of liquid with the right density of oil, and we closed the bag and cooked it under the pressure and the heat. Rice is like a sponge: It absorbs liquid and expands. When the liquid is dense enough, the absorption happens more slowly, which is a good thing. And after a lot of trial and error, we got the right proportion to make a rice that looks like a rice you would make in a kitchen. In the end, we were very happy with the result.

I already know the astronauts and [López-Alegría] have tested the rice and they love it. Now we need to make sure that they love it once they are up in the space station.

Do you ever want to go to space yourself and cook there?

My friend, if they give me the opportunity to go to space, I won’t waste a second. 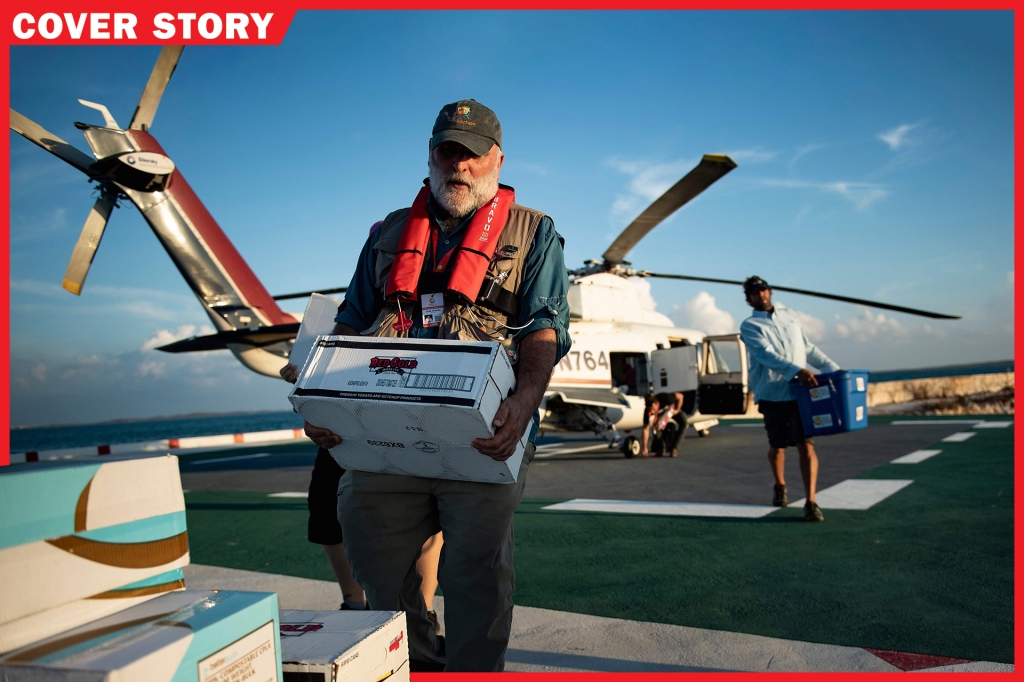 In late August, Hurricane Dorian formed over the Atlantic Ocean. The storm made landfall in the Bahamas on September 1, leveling buildings, flooding neighborhoods, and killing 51 people. Whole communities were left without power or water. As soon as the…