New Zealand plans to get rid of rats, possums, and other mammals by 2050. The country hopes to save native birds from these invasive species.

Rats are not many people’s favorite animal. But in most places, people have to learn to live with them. Not in New Zealand. There, people have had enough of the rodents. In July 2016, New Zealand’s then–prime minister, John Key, announced a plan to rid the archipelago archipelago

EARTH IMAGING/GETTY IMAGES a group of islands (noun) The islands of Indonesia and the Philippines are part of the world’s largest archipelago. completely of rats and several other mammals by 2050.

In New Zealand, rats are an invasive species. They arrived on boats, along with the island’s first human settlers, in the 13th century. When they were introduced to the island’s environment, the rats ate—and, scientists believe, ultimately killed off—several bird species.

Humans also brought other mammals, like stoats and possums. Stoats—which are similar to weasels—were introduced to eat another invasive mammal population: rabbits. Instead, the stoats fed on native species. Possums were introduced so people could trap them for their fur. But their population also grew quickly out of control. Possums feed on the eggs and young of native birds. They also cause damage to forests.

Kiwis are flightless. There are about 68,000 of the birds left in New Zealand. Stoats are their biggest predator.

One of the reasons invasive mammal populations grew so quickly is that New Zealand is home to almost no native mammals. Most of its native species are birds. Many, like the kiwi, which is the national bird, are flightless. Because they spent so long without natural predators, the birds lost the need to fly as a means of escape. But when mammals arrived, flightlessness became a big problem for the birds. Now, mammal predators kill about 25 million native birds every year. They are driving several species to the brink of extinction.

Eliminating predatory mammals is not new for New Zealand. The country has gotten rid of rats on some of its smaller islands. In those places, bird species that were almost wiped out have begun to flourish flourish

PAUL BRADBURY—CAIAIMAGE/GETTY IMAGES to grow; to be successful (verb) The lemonade stand flourished once the hot weather arrived. .

New Zealand hopes to expand and improve upon the methods used in those small areas. The government has pledged about $20 million to the project. Other money will come from local governments and private businesses. The funds will pay for research, technology, and tools to kill off the animals. 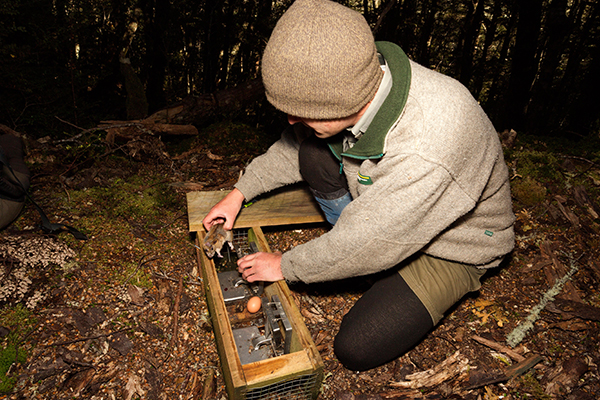 The government of New Zealand recommends several ways to get rid of pests. Traps and bait stations are the main types.

The new plan is “the most ambitious conservation project attempted anywhere in the world,” Key wrote in a statement. “But we believe if we all work together as a country, we can achieve it.”

It is a big goal. But scientists say it could happen. “I really do think it’s possible,” James Russell, an ecologist at the University of Auckland, in New Zealand, told the AP. “It will require people working in every nook and corner of the country.”