Thomas Jefferson (April 13, 1743–July 4, 1826) was one of the Founding Fathers of the United States. He drafted the Declaration of Independence, served as the country’s first secretary of state, and was elected the third U.S. president. As president, Jefferson was responsible for the Louisiana Purchase. He is one of the four presidents represented on Mount Rushmore, in Keystone, South Dakota.

Thomas Jefferson was born into a wealthy plantation plantation a large farm or estate (noun) Her family owned a banana plantation in Guatemala. family in the Virginia colony. Compared to many others in the mid-1700s, he enjoyed a privileged childhood. Alongside his nine siblings, Jefferson explored the woods, read books, and studied. He received instruction from private tutors. He enrolled in the College of William and Mary in 1760. He practiced law and served in local government.

In 1772, Jefferson married Martha Wayles Skelton, and the couple moved to Monticello. There, Jefferson would spend more than 40 years building a grand estate. Thomas and Martha Jefferson had six children but only two of them survived into adulthood.

Jefferson was a great thinker, architect, inventor, farmer, and patriot patriot a person who supports or defends his or her country (noun) He was a patriot who loved his country. . He was also an early champion champion a person who fights or argues for a cause (noun) She is a champion for the environment and has educated many students about recycling. of democracy and a voice for independence. As the colonies planned to break away from British rule, Jefferson took an active role in what would become a revolution. Eventually, he would help shape the United States—politically, economically, and geographically. 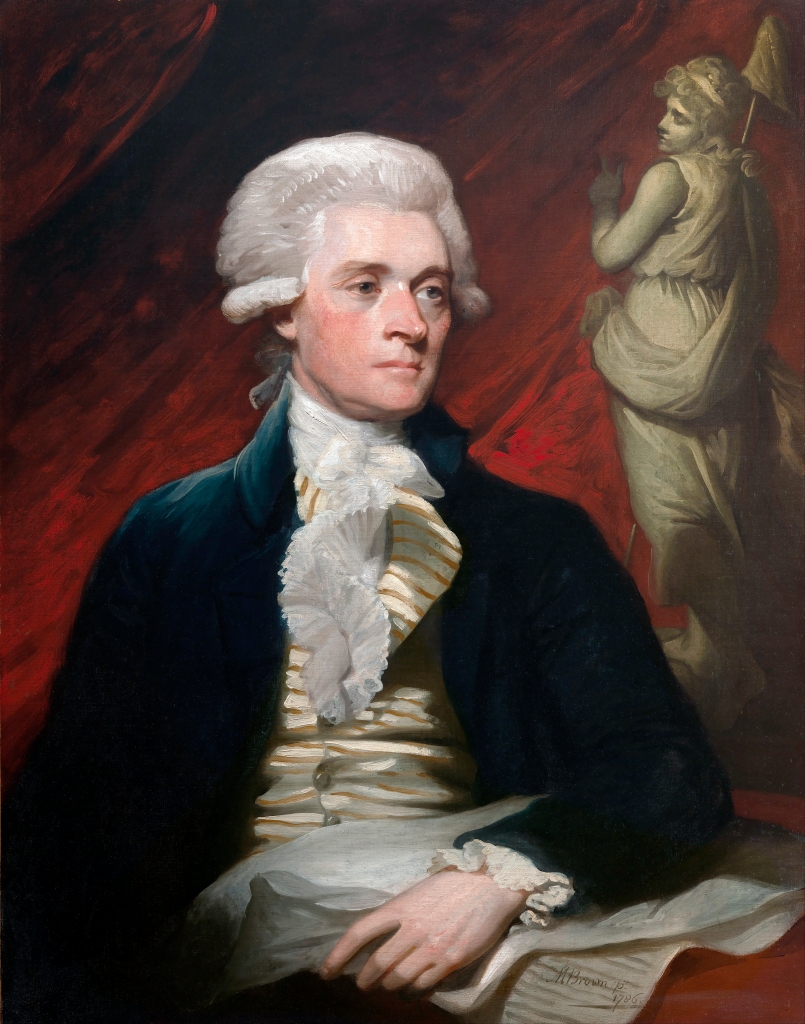 Thomas Jefferson is considered one of America’s founding fathers. He is was third president of the United States, and drafted the U.S. Declaration of Independence.

Tall and with a face full of freckles, Jefferson was more comfortable writing his own thoughts than speaking in public. That made him the ideal choice to write the document proclaiming the colonies’ freedom from King George. In 1776, the 33-year-old Jefferson drafted the Declaration of Independence. He received input from John Adams, Benjamin Franklin, Roger Sherman, and Robert R. Livingston. But Jefferson is widely acknowledged as the primary author of the Declaration.

During the Revolutionary War, Jefferson served three years, 1779–1781, as governor of Virginia. The role had no real authority. After the war, he served in Congress in 1783. Then, in 1785, he was appointed ambassador to France. He spent four years in the post, until President George Washington asked him to join his Cabinet cabinet a group of advisors to the U.S. president (noun) The president's Cabinet advised him on economic policies. as the nation’s first secretary of state.

While serving in the Cabinet, Jefferson famously clashed clash a conflict (noun) The band broke up because of a clash between the singer and drummer. with the secretary of the treasury, Alexander Hamilton. Their arguments formed the central conflict of the new nation: Would the United States’s authority be shared by the 13 states? Or would the country be governed by a strong central government? Jefferson believed in states’ rights, while Hamilton argued for an active federal government. This debate continues in the United States to this day.

Some Americans expected Washington to serve as president for life. But Washington believed a peaceful transition of power from one president to another was important for the success of the young country’s democracy. Washington decided to retire at the end of his second term, in 1797.

This opened the door for Jefferson to become the nation’s next leader. But he lost the 1796 presidential election to John Adams. Jefferson received the second-highest number of votes, and the law at the time made him vice president. Jefferson ran against Adams again four years later. This time he won and became the country’s third president. He served two terms.

One of the most important decisions he made as president occurred during his first term. In 1803, the U.S. bought 828,000 square miles of land from France. The Louisiana Purchase nearly doubled the size of the nation. Jefferson quickly sent Meriwether Lewis and William Clark to explore the new territory. The men, along with others on their team, traveled all the way to the Pacific coast and surveyed areas that were not yet a part of the U.S. The group returned in 1806 with valuable information about areas in the western part of the continent.

After leaving the presidency in 1809, Jefferson returned to Monticello. He helped create the University of Virginia in 1819 and continued writing until his death on July 4, 1826. Jefferson died exactly 50 years after the Declaration of Independence was signed. He passed away just hours before fellow Founding Father and former political rival John Adams.

While Jefferson was much beloved, he left behind a complicated legacy legacy something left by a predecessor for those to come (noun) The civil rights movement has left a legacy of courage. . In the Declaration, Jefferson wrote some of the most significant words in the founding of the nation: “We hold these truths to be self-evident, that all men are created equal.” Jefferson claimed to oppose slavery. Yet he owned as many as 600 slaves in his lifetime and believed that African Americans were inferior to whites. He also is believed to have fathered six children with one of his slaves, Sally Hemings.

Despite such contradictions, Jefferson remains an icon of American democracy. Today, his face appears on the nickel, the $2 bill, and is carved into Mount Rushmore.