FOLSOM, California — Most kids are sound asleep at 2:45 in the morning, but on a Saturday this past summer, two sisters were up way past their bedtime. They were waiting for a bus. When it pulled up outside Saint Columba church, in Oakland, the girls jumped out of the SUV they were waiting in. They darted across the parking lot and confidently climbed aboard.

Their great-grandmother Ruby was right behind them. I went along for the ride, too. “Pikachu!” Mi’Angel, 6, said when I asked about her yellow pajamas. Ruby smiled. “Pikachu is a cartoon,” she told me.

Mayal, 8, had more to say, and she said it in what seemed like a single breath: “I am a zebra with a bunch of stars and my pajamas have pockets and a hood with ears.”

The girls were full of nervous energy. That’s because they were on their way to visit their mom, Donisha, in prison, through a special program called Get on the Bus.

When a person is found guilty of breaking the law, he or she can be sent to jail or prison. Jail is usually for a shorter sentence sentence 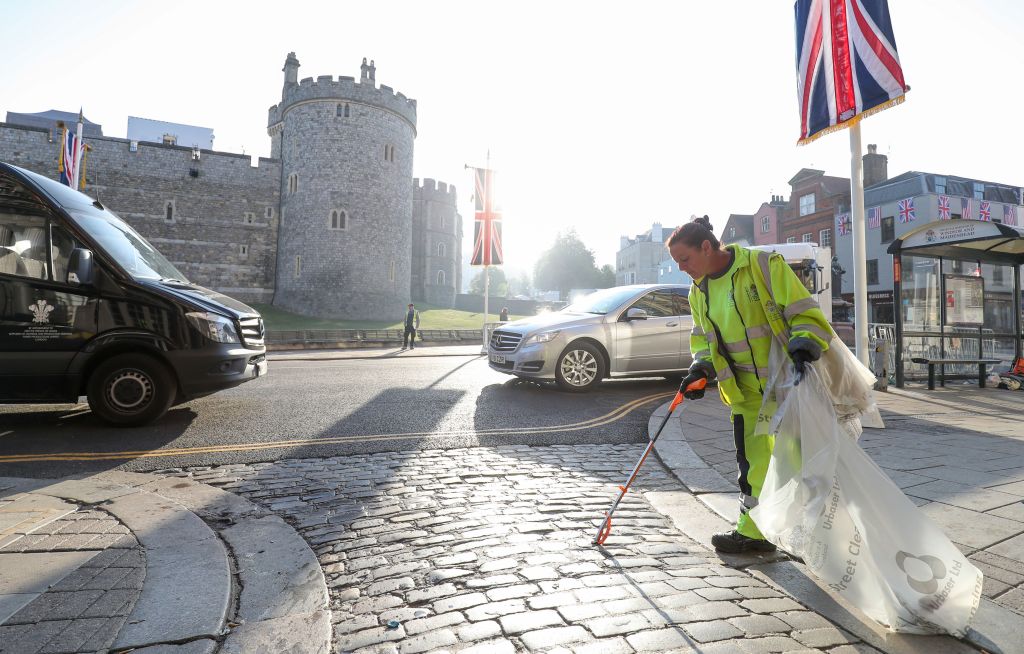 ANDREW MATTHEWS/PA IMAGES—GETTY IMAGES a punishment (noun) The judge gave Cynthia a sentence of 100 hours of community service, cleaning up litter in her town. , while prison is for a longer sentence.

In the United States, about 2.7 million children have a parent in jail or prison, according to a report from the Pew Charitable Trusts. That’s one in 28 kids. 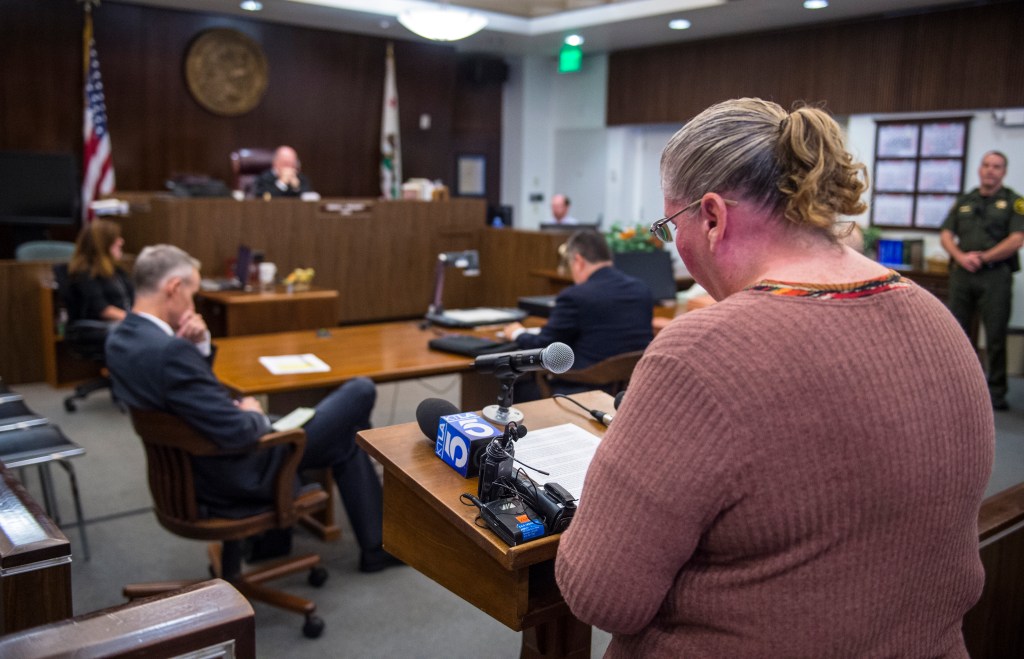 MARK RIGHTMIRE/DIGITAL FIRST MEDIA/ORANGE COUNTY REGISTER—GETTY IMAGES imprisoned (adjective) If he is found guilty at trial, he will be incarcerated. can have a positive effect on a child. But prisons are often far from where families live, and travel can be expensive.

Get on the Bus takes kids to see parents at 13 prisons throughout the state of California. The program provides free transportation and food. It’s run by the Center for Restorative Justice Works (CRJW), a nonprofit group based in the Los Angeles area. In 2019, Get on the Bus trips will run from April through June.

“These visits are so critical,” says CRJW executive director Lupe Rivera. “They’re an opportunity for parents to be parents.” They’re also a chance to strengthen relationships.

Five hours, 100 miles, a stop to pick up more passengers, and a breakfast break later, our bus pulls up to Folsom State Prison. Three more buses follow. They’ve been on the road since Friday night, for nine to 10 hours. In all, 120 family members have come to see 32 incarcerated loved ones.

Donisha lights up when Mayal and Mi’Angel step into the cafeteria. “Words can’t even describe it,” she says when I ask how she feels. “It’s just wonderful.” All around us, people are hugging and laughing. Families play board games, kids sit for face painting, and a mother braids her daughter’s long, brown hair.

Donisha and her girls go outside to jump rope. Nearby, 13-year-old Isacc and his mom, Tasha, are playing basketball. “You’ve gotten so big,” she says as she dribbles. Another mom cracks jokes. “It just gives us hope,” her daughter Jasmine, 21, says, as Daisy, 12, and Mary Jane, 10, look on. “It makes us look forward to when she gets out and we can put our family together again.”

We’re back on the bus at 1:45. “It was fun!” Mayal says when I ask about her day. Then she gets serious. “I started crying,” she says. “I actually did. I cried, I stopped, I cried, I stopped. I was sad that I had to leave my mom. I almost fell asleep on her lap.”

Ruby listens. “You want to come again?” she asks. “I’ll bring you.” 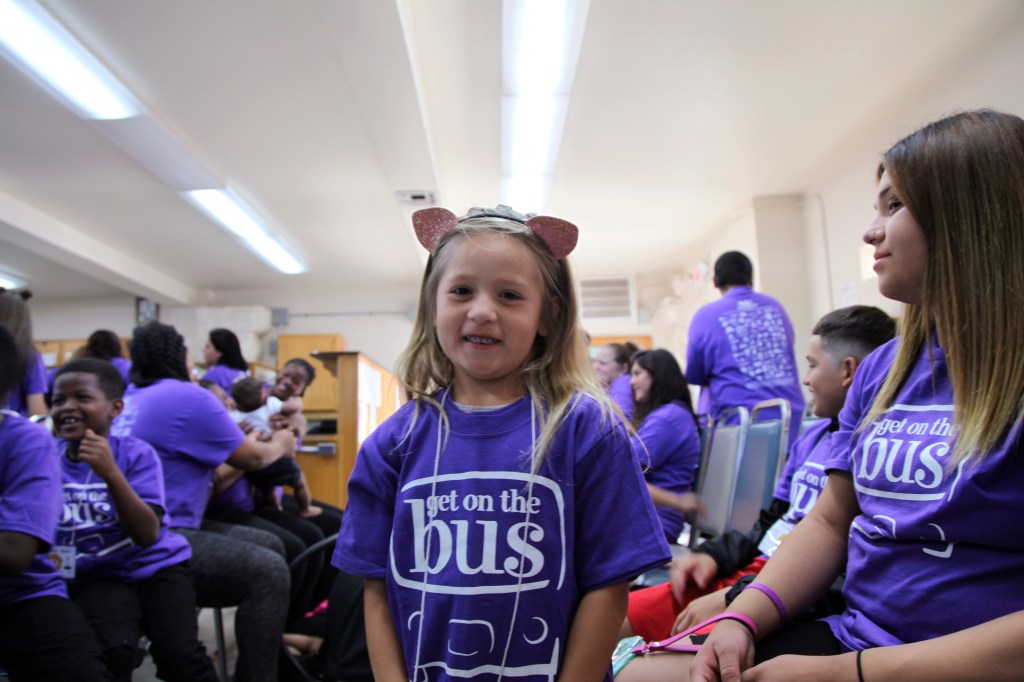 READY TO GO Rosary, 5, is excited to see her dad. (Folsom has separate prisons for men and women.) In this photo, she and others wait to check in. Visitors must show identification and go through security screening. 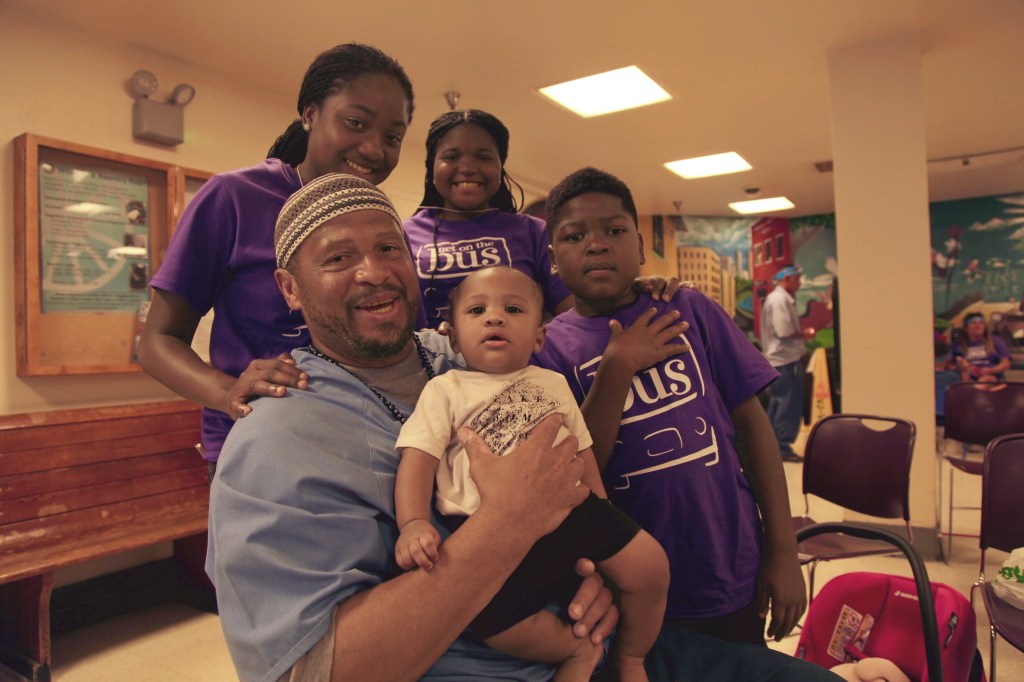 FAMILY REUNION Letters and phone calls help families stay in touch while a loved one is incarcerated. But visits are extra special. “I’m so blessed that they came to see me,” David (center) said of the nine family members who traveled with Get on the Bus. Usually, people can have only five visitors at a time. 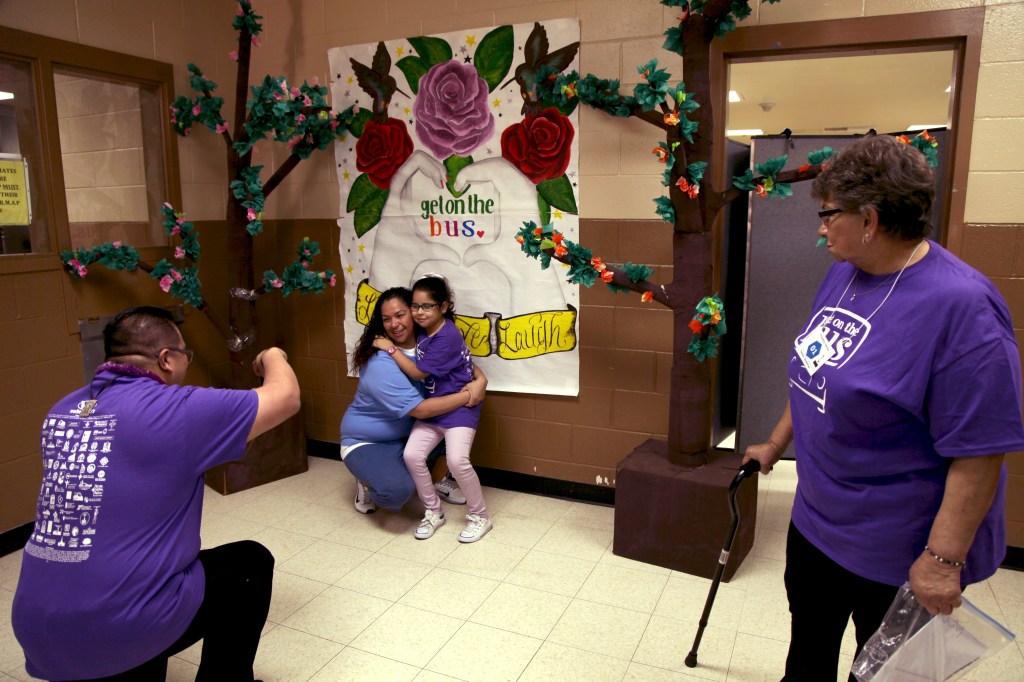 SAY CHEESE! A Get on the Bus volunteer takes a picture of Serenity, 7, with her mom, Natalie. Serenity’s grandma (right) and grandpa (not shown) posed with them too. At the end of the visit, Serenity and the other kids on the trip got a frame in which to display their family photo. 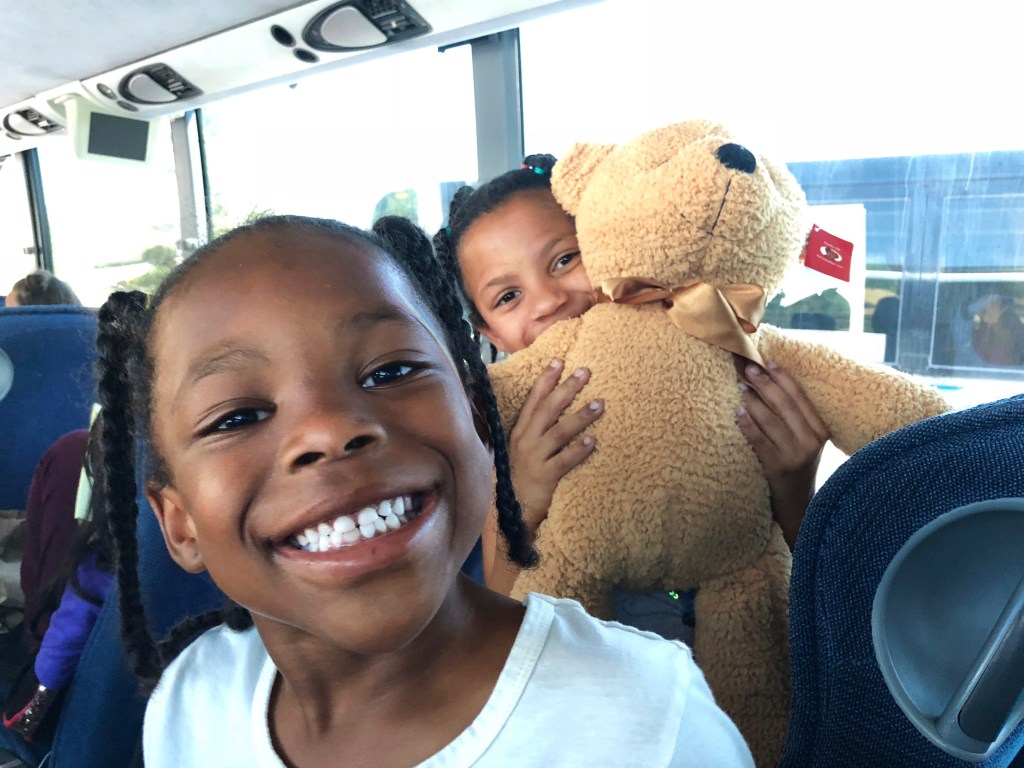 BACK ON THE ROAD After a six-hour visit, it’s time to go home. Get on the Bus gave each child a teddy bear. Mayal had a plan for hers. “I want to go to sleep,” she said. “This is going to be my pillow.”

Jaime Joyce is executive editor at TIME for Kids. She traveled to California to report this story. It is supported by the Pulitzer Center on Crisis Reporting.