Each weekday, more than 30 million students eat meals served in school cafeterias in the United States. And when lunch period is over, they fill the trash cans with uneaten food.

Half-eaten apples, chicken tenders, and turkey sandwiches come at a cost. That’s why schools across the U.S. are trying to reduce the amount of food that gets thrown away. “We don’t want good food to go to waste,” Nancy Deming told TIME for Kids. She’s the sustainability manager for the Oakland Unified School District, in California. 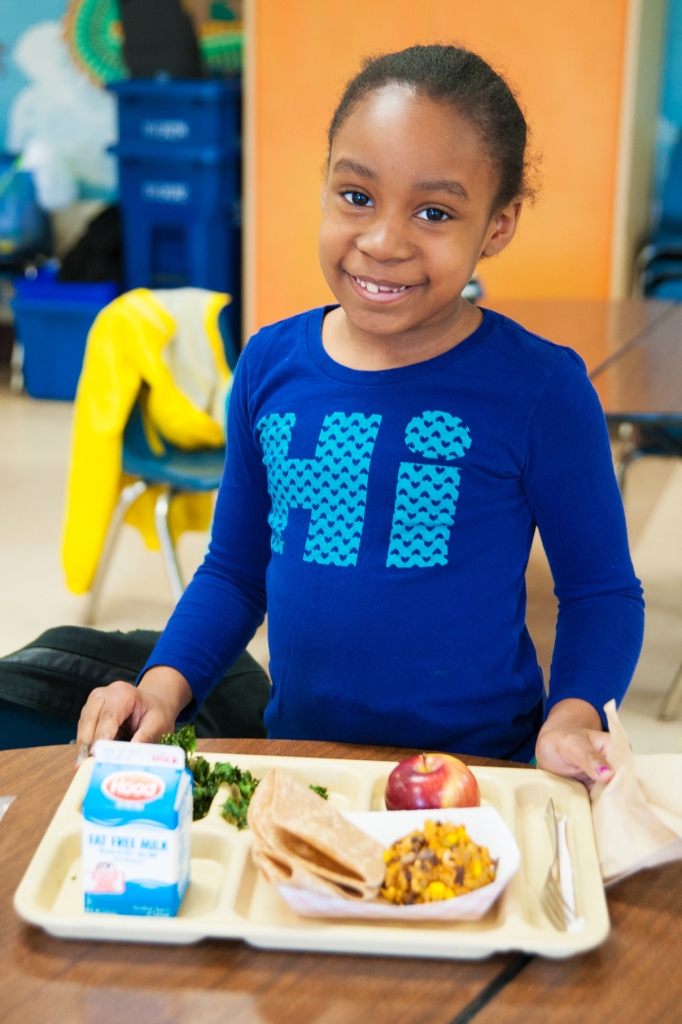 A BETTER LUNCH A student in Massachusetts shows off her meal from the Chefs in Schools program.

According to the U.S. Department of Agriculture (USDA), about $1.2 billion worth of school food is wasted every school year. Wasted food is money. It’s also a missed opportunity to feed hungry people. And it’s bad for the environment: Farming, packaging, and transporting food produces greenhouse-gas emissions, which pollute the air. Plus, food packaging often ends up in a landfill.

Schools have developed strategies to cut back on waste. Since students are often hungrier after active play, scheduling lunch after recess can reduce the amount of food that’s wasted by 30%, according to the USDA. Making lunch period longer also helps. It gives kids time to eat everything on their tray.

Many schools districts follow government regulations requiring students to take a certain number of healthy food items at mealtime. Those rules were designed to ensure that kids get a balanced meal. But making kids take food they don’t want leads to more waste. 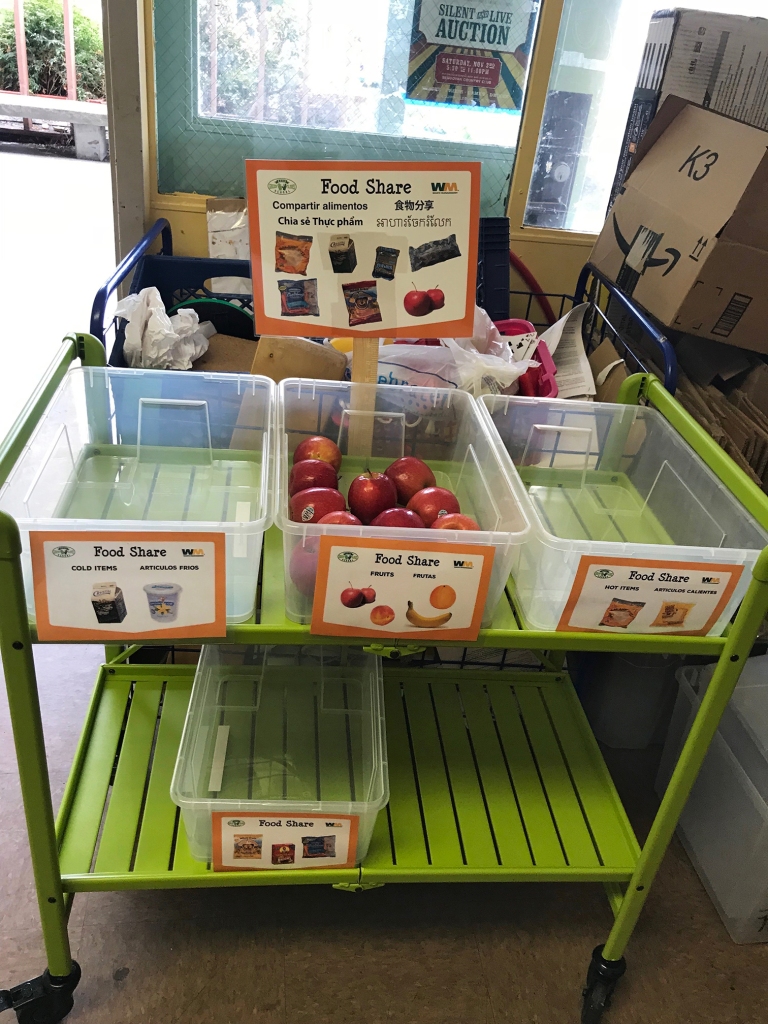 SHARING IS CARING This share table in Oakland, California, has instructions for sorting food.

That’s why the Oakland Unified School District set up something called a share table. Students place untouched food on the table, and a student who wants it can take it. There are rules in place to make sure all food on a share table is safe for students to eat.

Clean, fully uneaten food that isn’t taken from the share table is returned to the kitchen to be served another day. If the food can’t be reused at school, it is donated to a charity. Food scraps that can’t be reused are turned into compost. “It’s about recognizing that food has value,” Deming says. Strategies like this have made Oakland a leader in the movement to reduce food waste. 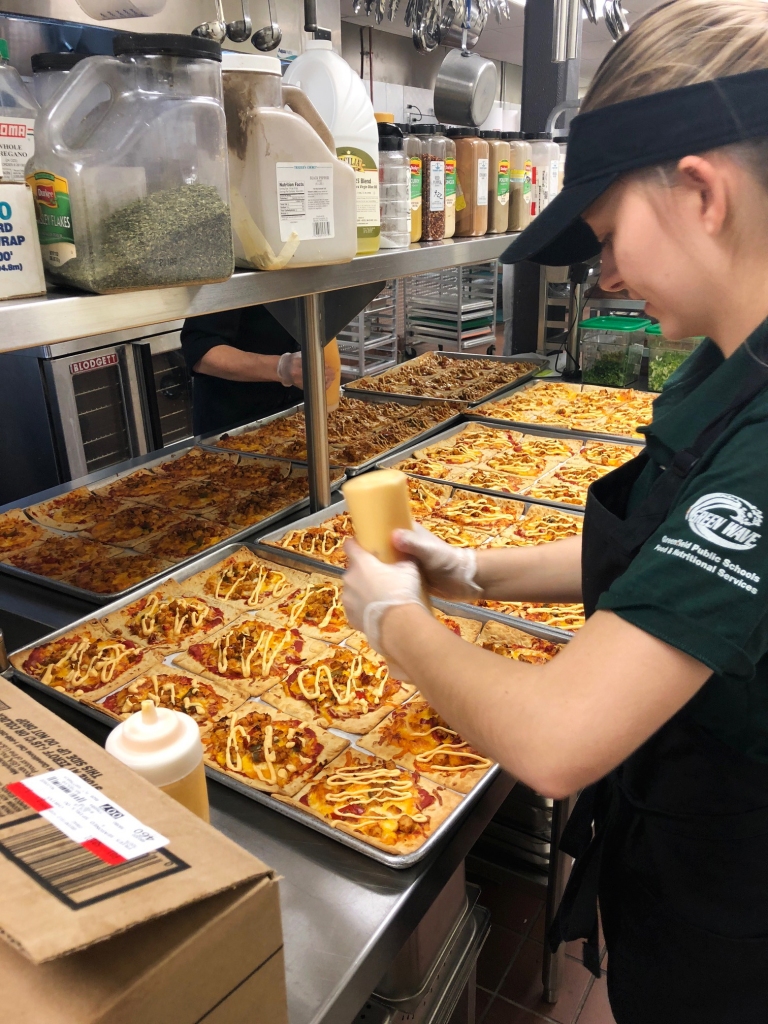 YUM! A cook in Oakland prepares a recipe for spicy chicken flatbread. The recipe was developed to reduce waste.

Another reason students waste food is that they don’t like how it tastes. Chef Sam Icklan wants to change that. He works with a program in Massachusetts called Chefs in Schools, which helps cafeteria staff develop recipes kids enjoy, using healthy ingredients. While working on recipes, Icklan conducts taste tests with students. “If they like it, great. If they don’t, we keep working to find something they do,” he told TFK.

In one school where kale often went uneaten, Icklan developed a recipe for pizza topped with kale, zucchini, and spinach. He called it Green Monster Pizza. Students polished it off. “It became this beautiful, vibrant dish that was delicious and packed with vegetables,” Icklan says. “Who wouldn’t eat that?” 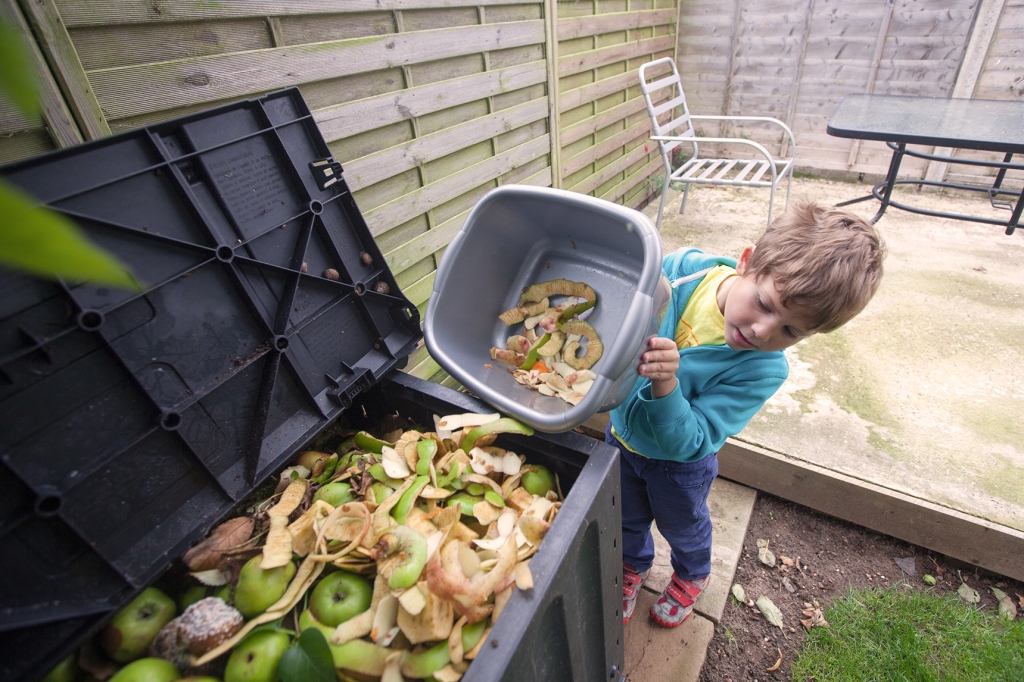 You can fight food waste too. At the grocery store, look for “ugly” produce. Fruits and vegetables with irregular shapes are just as tasty as perfect ones but often go to waste. When choosing food at home, read safety labels. If a label says “best before,” the food is still safe to eat for a little while after that date. (If the label says “use by,” the food is no longer safe after that date.) At mealtime, start with small portions. If you’re still hungry, you can take more later. And when you don’t eat food, don’t throw it away. Turn it into compost instead.

Stop & Think! What makes this story important? Why do you think the author chose to write it? After reading this story, are you more concerned about food waste? Why or why not?