COX'S BAZAR, Bangladesh — Just as the last little kid walks single-file out the door, about 30 very eager 7- to 10-year-olds burst in to take their place. Quickly, they claim spots around the perimeter of the lively one-room Golap Child Learning Center.

“These children have faced violence in Myanmar,” says co-teacher Muhammad Jaber Ahmed through a translator translator 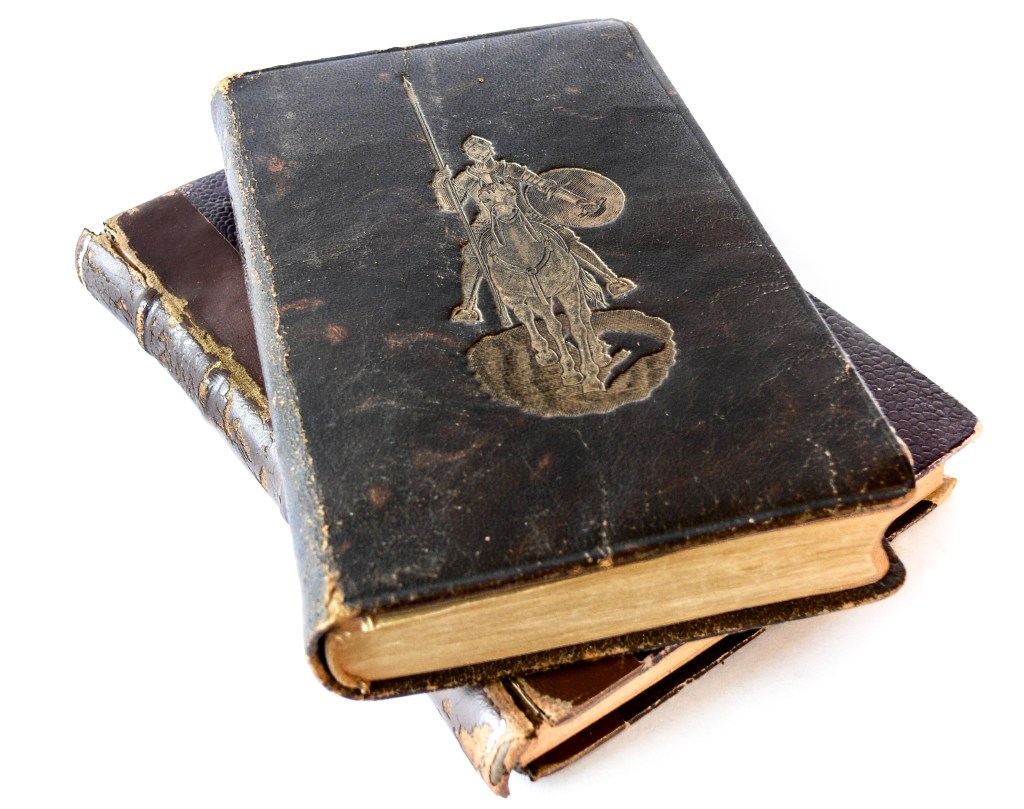 LALOCRACIO/GETYY IMAGES a person who changes words in one language to words in another language (noun) The novel Don Quixote was written in Spanish, but translators have created many English versions of the text. . “But after three or four months at the learning center, the children have become happy. They have come back to their normal life.”

SPACE IMAGES/GETTY IMAGES to make something steady (stabilize) The extra poles are for stabilizing the tent. force for children who have been touched by tragedy.

Who Are the Rohingya?

The Rohingya are a Muslim minority minority 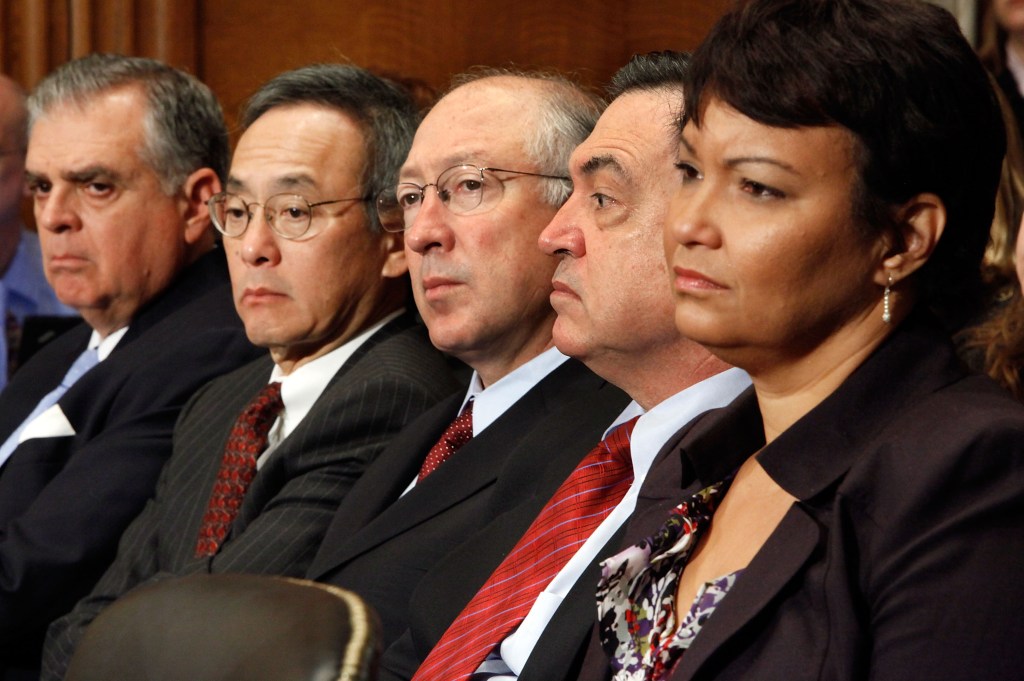 CHIP SOMODEVILLA/GETYY IMAGES the smaller of two groups (noun) Female lawmakers are a minority in Congress. in Myanmar, which is mainly Buddhist. Myanmar’s government denies them citizenship even though they have lived there for centuries. Human-rights groups say that of all the world’s peoples, none faces greater discrimination than the Rohingya.

A little over a year ago, on August 25, 2017, the Myanmar military carried out deadly attacks on Rohingya people. The United Nations (U.N.) has accused it of genocide genocide 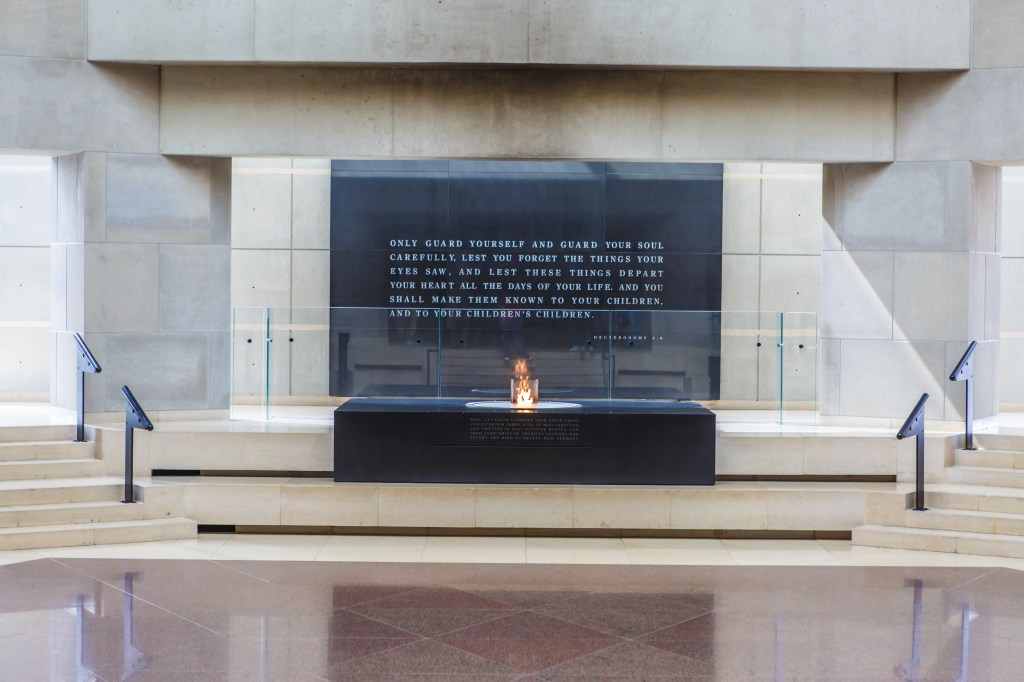 RYPSON/GETTY IMAGES the killing of a group of people who belong to a certain racial, political, or ethnic group (noun) My class visited the United States Holocaust Memorial Museum, where we learned about genocide. . 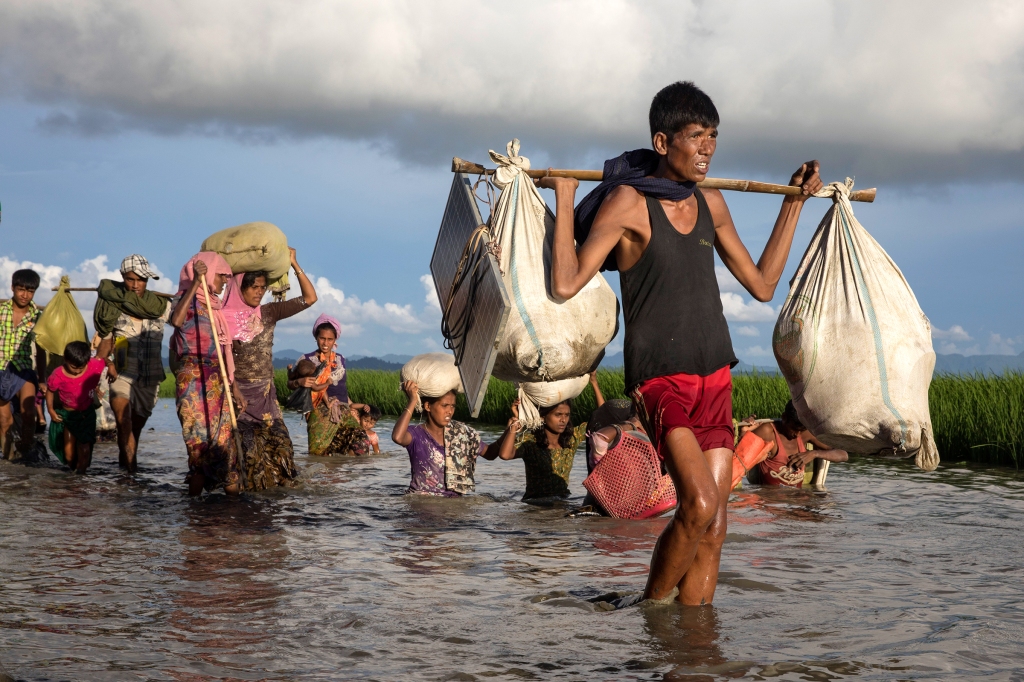 SEEKING SAFETY Refugees walk in a rice-field canal after crossing into Bangladesh.

Ahmed, the teacher, escaped. So did his students. “There were fires, and shooting,” 8-year-old Gulbahar tells me. For eight days, she and her nine siblings sheltered deep in the jungle before reaching Bangladesh. 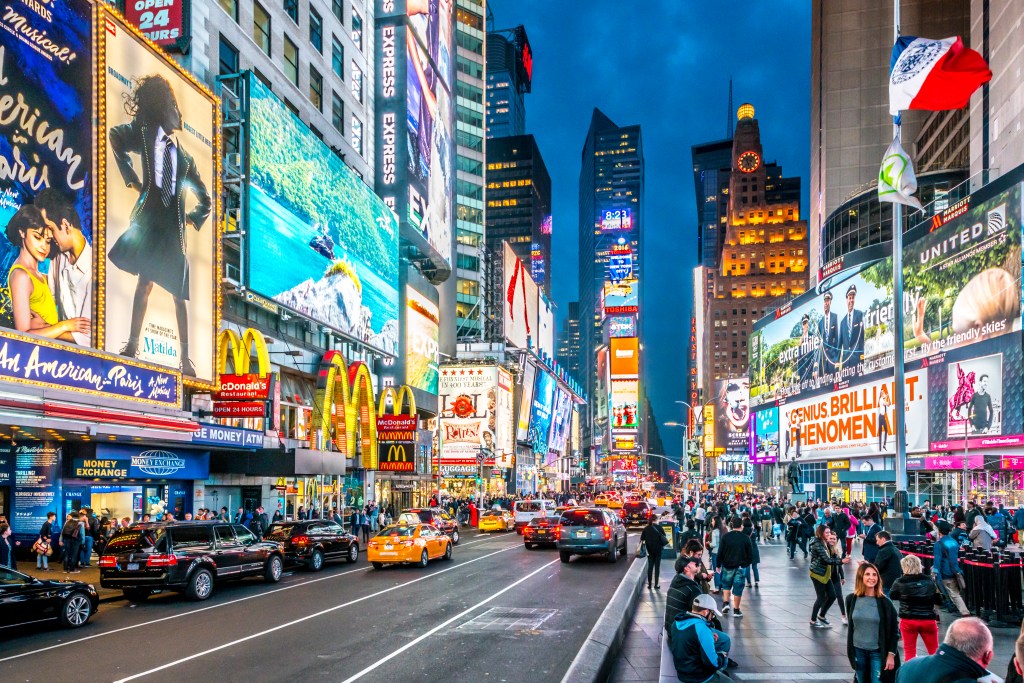 ZSOLT HLINKA/GETTY IMAGES the arrival of a large number of people (noun) Each summer, New York City sees an increased influx of tourists. of more than 700,000 Rohingya people. They now live in temporary shelters made of bamboo and plastic tarps on rolling hillsides cleared of nearly all vegetation.

In August 2018, the U.N. said it was not yet safe for the Rohingya to go home. For now, aid workers do all they can to keep people safe and healthy in the camps. Dirt roads are being paved with brick to prepare for monsoon season, which brings heavy rains. On steep hillsides, shelters are anchored against high winds and cyclones by steel pegs and rope. 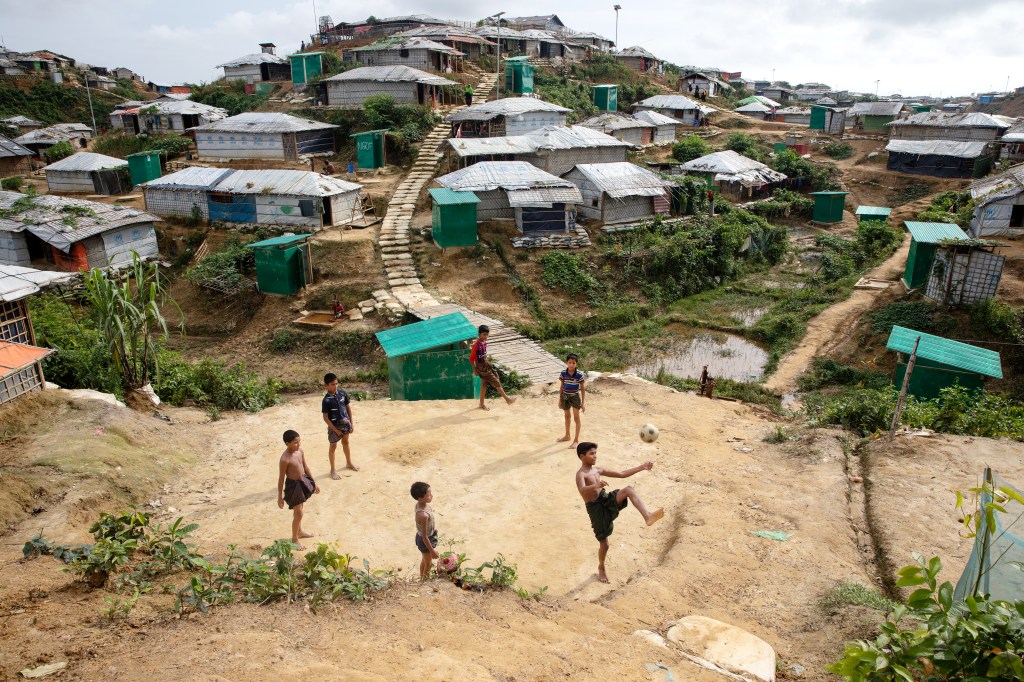 Steps are being taken to improve access to education. By the end of 2018, UNICEF and partners hope to open an additional 565 learning centers. This would allow another 107,000 Rohingya children to attend classes.

Despite tough circumstances, children stay positive. At the Golap Child Learning Center, they expressed this through song: Deep in my heart / I do believe / We shall overcome someday. The lyrics are from the American civil-rights anthem anthem 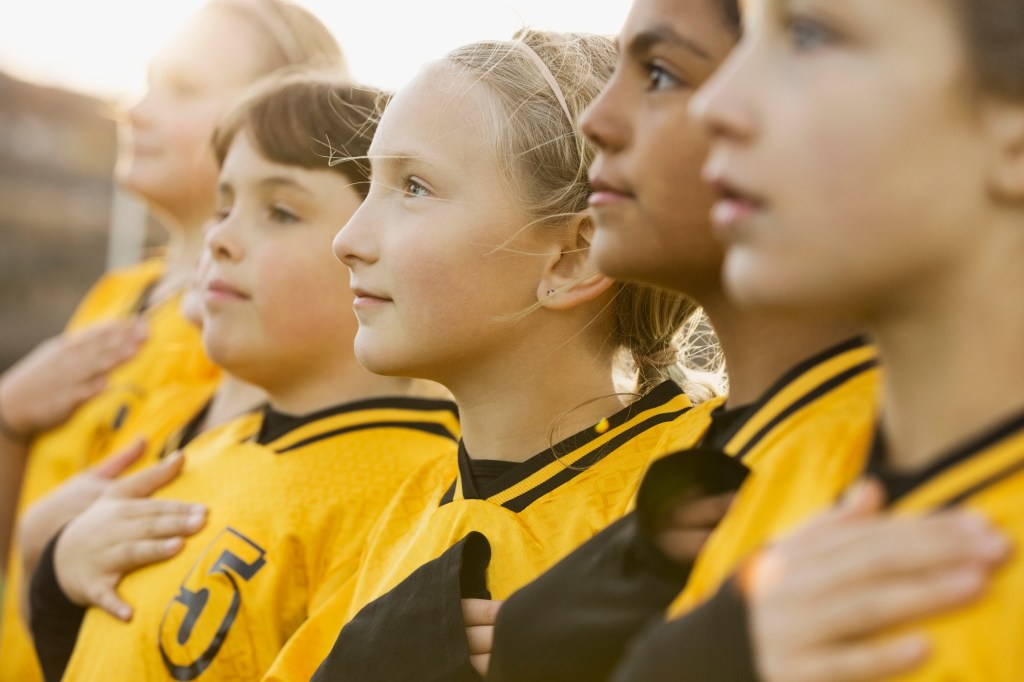 HERO IMAGES/GETTY IMAGES a song that is important to a particular group of people (noun) The national anthem is sung before many sporting events in the United States. “We Shall Overcome.” “They call it ‘World Song,’” UNICEF education officer Iffat Farhana says. “It helps them feel motivated to overcome this situation.” 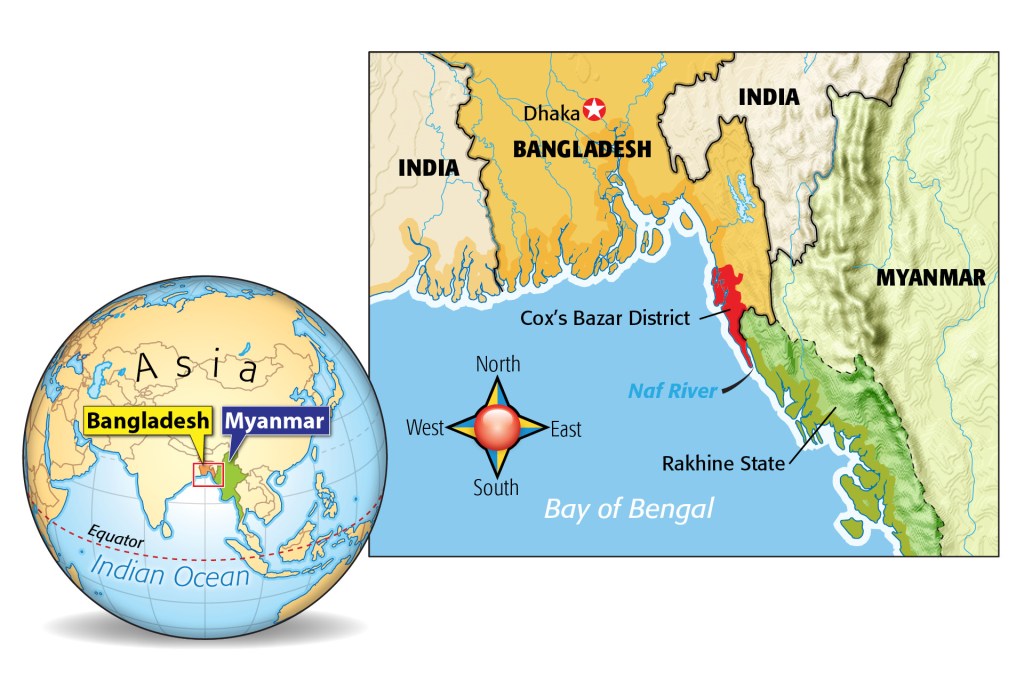 After military attacks, thousands of Rohingya people fled Myanmar’s Rakhine State for Bangladesh. They crossed the Naf River and the Bay of Bengal in fishing boats and on rafts. “A lot of people can’t swim, especially in these rough seas,” says UNICEF emergency field coordinator Peta Barns. In Cox’s Bazar, aid workers met them on the shore with food, water, and blankets. “Imagine streams of people,” Barns says. “We didn’t know when it was going to stop.”

Stop and Think! What words and phrases does the writer use to evoke emotion? How does this help readers connect with the story?

Jaime Joyce is executive editor at TIME for Kids. She traveled to Bangladesh to report this story. It is made possible through a grant from the Pulitzer Center on Crisis Reporting. 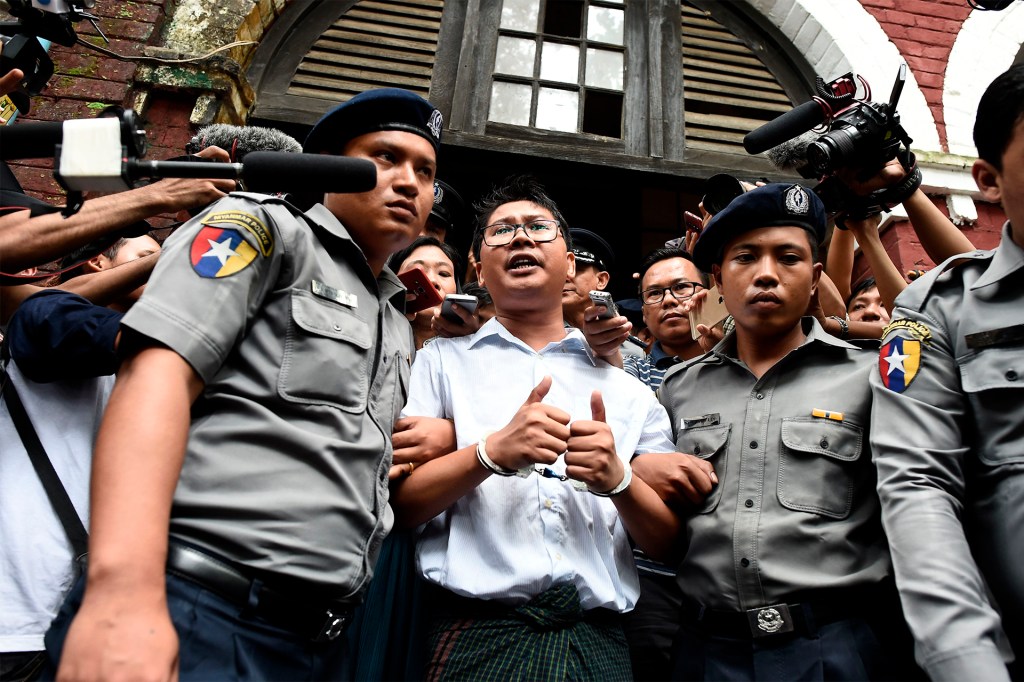 Jailed for the Truth

A court in Myanmar has sentenced two journalists from the Reuters news agency to seven years in prison. Earlier this month, the judge ruled that Wa Lone and Kyaw Soe Oo illegally got hold of secret government documents. The journalists… 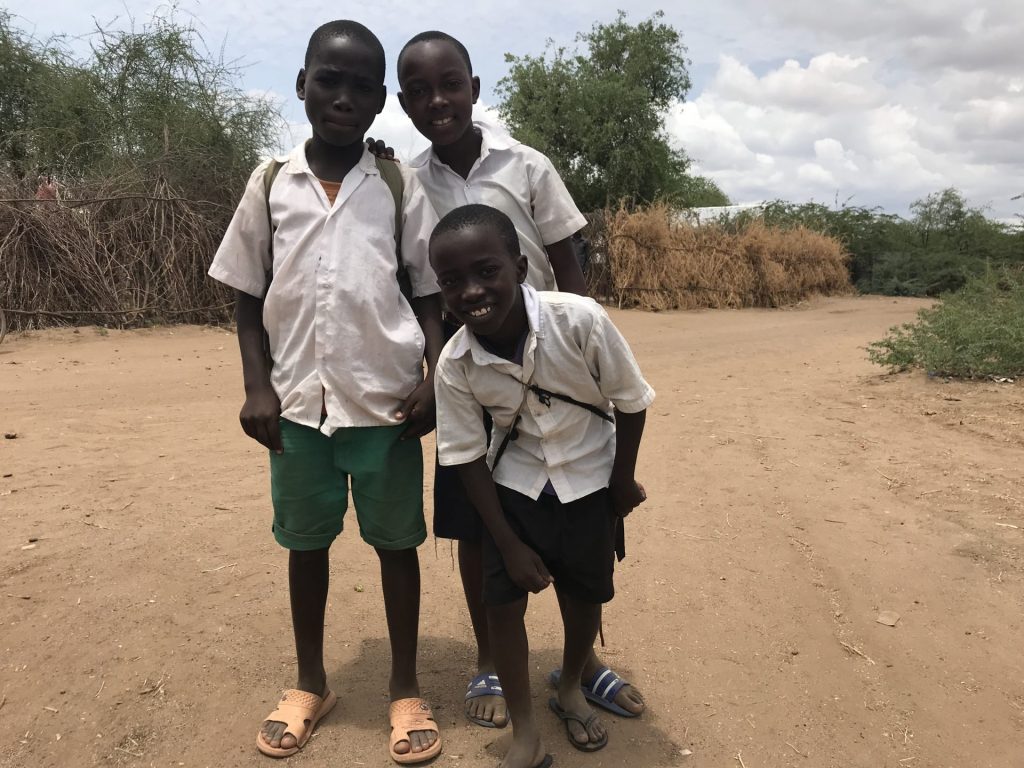