A bridge is taking shape over the Hudson River. The New NY Bridge, as it is being called for now, will replace the Malcolm Wilson Tappan Zee. The three-mile-long Tappan Zee was built in 1955 and connects Nyack, New York, with Tarrytown, New York. Its builders thought 100,000 vehicles would travel across the structure each day. Instead, an average of 138,000 vehicles cross it daily. The Tappan Zee was built to last 50 years. It has—and more. But its time has run out.

For years, politicians discussed whether it was worth spending billions of dollars to replace the aging bridge. In 2011, New York governor Andrew Cuomo pushed for a new bridge to be built.

President Barack Obama supported Cuomo. “At times, you can see the river through the cracks in the pavement. Now, I’m not an engineer, but I figure that’s not good,” Obama said during a speech in Tarrytown. “We can build better, and we have to.”

Brian Conybeare has been a special adviser for Governor Cuomo for the project. He says it made more sense to build a new structure than to fix he old one. The new bridge will be “safer and smoother” for motorists, he says.

The Tappan Zee has seven lanes, each 11 feet wide. New safety rules call for lanes to be 12 feet wide. Experts say the bridge’s biggest problem is that it has no emergency shoulders. These are areas where vehicles can safely pull over. The Tappan Zee has more accidents than any other stretch of the New York State Thruway system.

The new bridge will have eight lanes. It will have a commuter bus lane and a bike-and-pedestrianpath. It is being built next to the old bridge, which will be taken down. 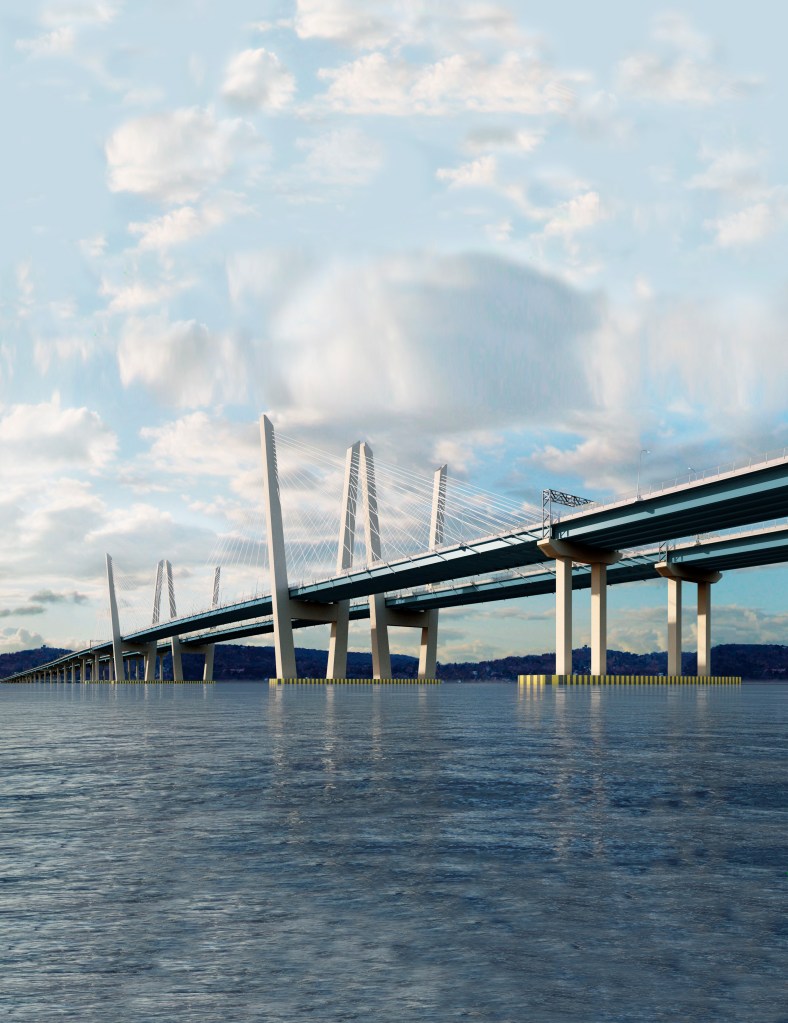 This is an artist’s view of the new bridge.

With a budget of $3.9 billion, the New NY Bridge is the biggest bridge project in New York State history. When it’s finished, more than 5,000 people will have worked on it. The new structure, which is yet to be named, will be one of the longest cable-stayed span bridges in the U.S. The first span of the twin-span bridge is set to open in 2016. The second will open in 2018.

David Capobianco is an engineer working on the New NY Bridge project. He says the bridge is being built to last 100 years. “This is the dream project for engineers,” he says.

The New York State Thruway Authority is taking special care to keep animals safe in the construction area. Endangered peregrine falcons have made a home in a nest box on the old bridge. A camera keeps a watchful eye on three chicks. In the water, a “bubble curtain” lessens construction sounds and protects endangered Atlantic and shortnose sturgeon. “Workers are building the bridge in a way that doesn’t harm the environment,” says engineer David Capobianco.

What are two reasons for replacing the Tappan Zee Bridge?