COVID-19 and The Economy

Maybe you’re reading this in your classroom, with desks spaced six feet apart. Maybe you’re reading it at home, and you’ll discuss it online. The coronavirus that began spreading last winter has changed our lives. Some of the biggest changes have been economic. This month, we take a look at what happened to the U.S. economy this year, where we stand, and what might be ahead. 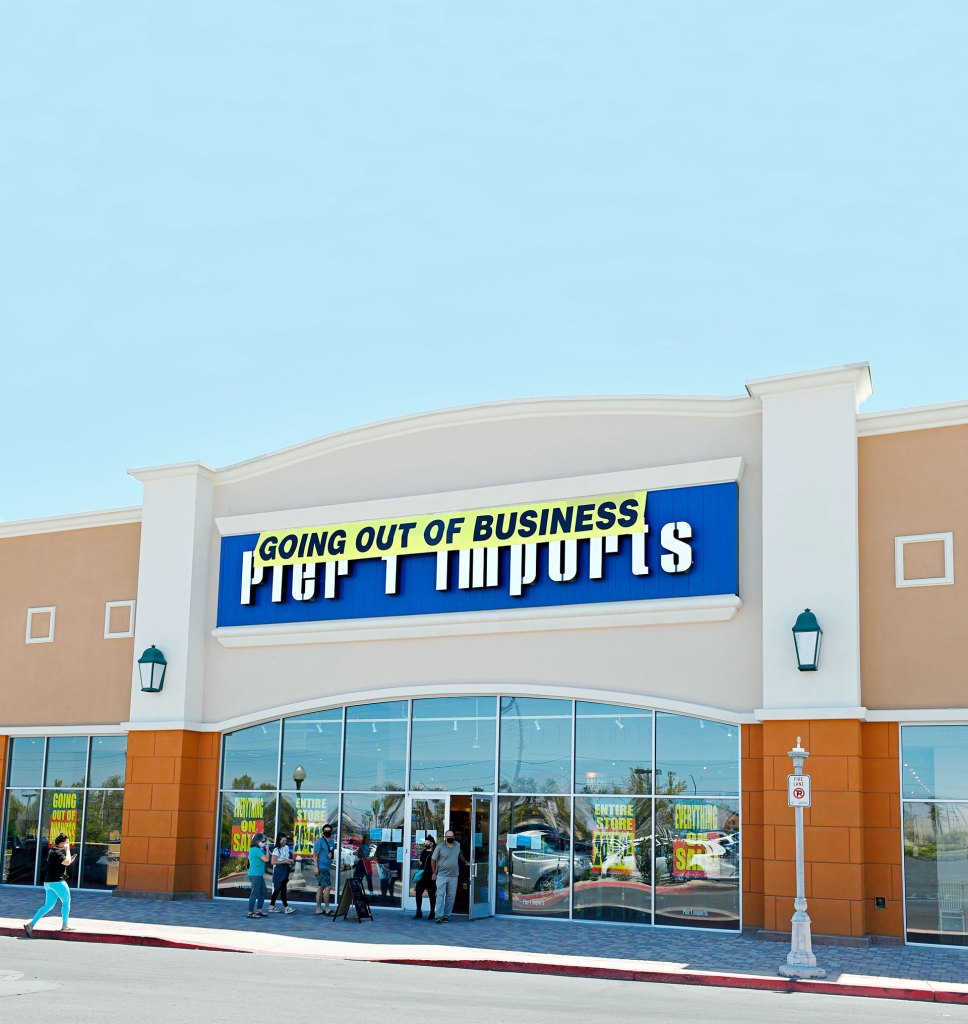 HARD TIMES Pier 1 Imports is a company affected by the pandemic. Here, a store holds a going-out-of-business sale.

Big Shift In A Short Time

The economy is how the U.S. and other countries measure their wealth and resources over time. We talk about an economy as being good or bad. A good economy is one in which businesses are making money, people are finding jobs, consumers consumer 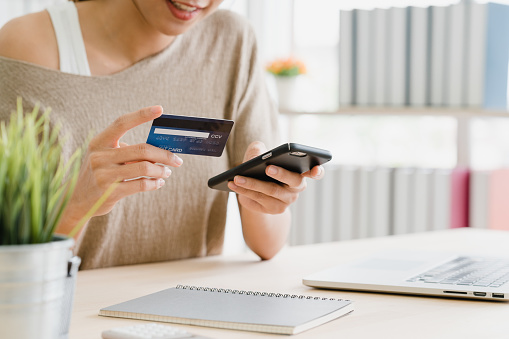 TIRACHARD KUMTANOM—EYEEM/GETTY IMAGES someone who buys goods or services (noun) Some consumers would rather shop online than in a store. are spending money, and the gross domestic product, or GDP GDP 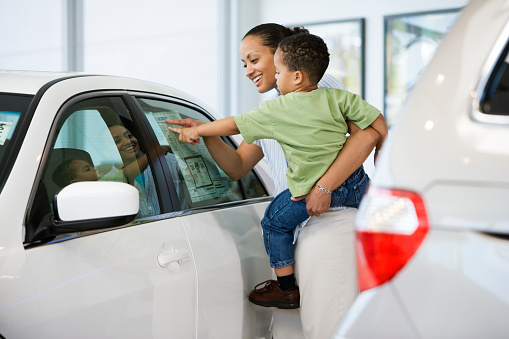 DON MASON—GETTY IMAGES gross domestic product; the total value of the goods and services a country produces (noun) Automobile sales make up a large portion of the United States GDP. , is going up. A bad economy is exactly the opposite. 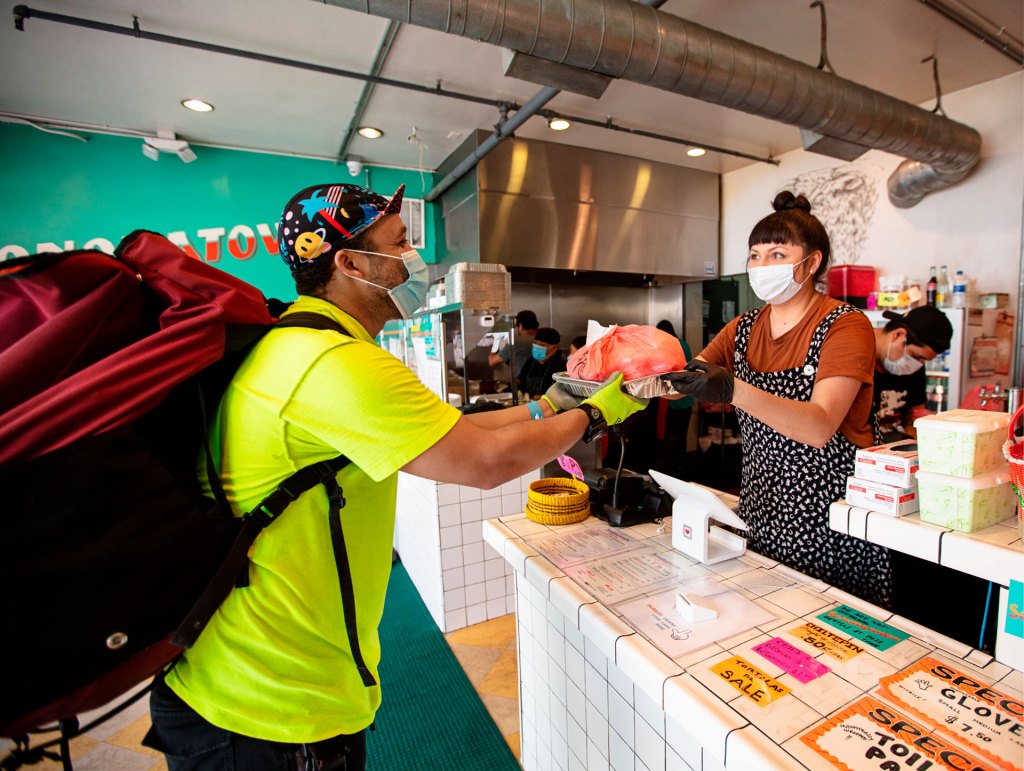 PLAYING IT SAFE Restaurants that had to shut down during the pandemic are starting to reopen, with new rules in place. Here, a delivery person and a restaurant worker wear gloves and masks during a food pickup in Los Angeles, California.

Loss Of Jobs And Businesses

Why did the U.S. economy fall so fast? On March 11, the World Health Organization declared COVID-19 a pandemic pandemic 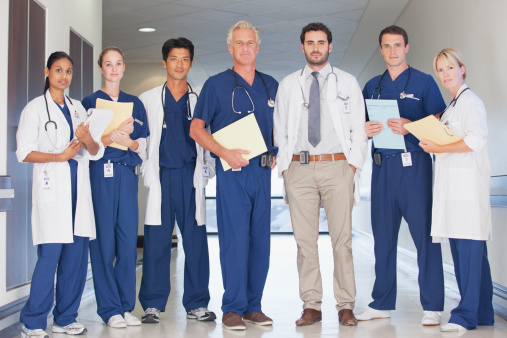 SAM EDWARDS—GETTY IMAGES an outbreak of a disease that spreads very quickly and affects a large number of people throughout the world (noun) Doctors around the world teamed up to try to stop the spread of the pandemic and keep people healthy. . Activities that took people out of their homes began to shut down. 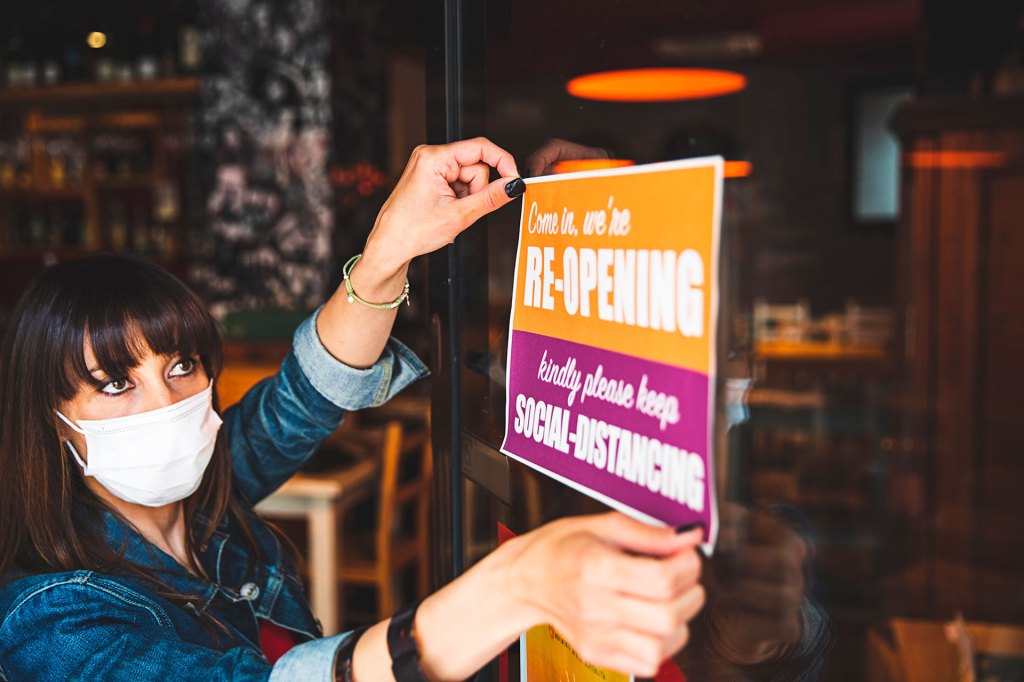 Two days later, 16 states had closed schools, with the rest to follow. And by the end of March, 26 states had issued stay-at-home orders. Only essential businesses, such as groceries, drugstores, and hospitals, were allowed to stay open. Just as many students were able to go to school remotely, or from a distance, many workers were able to do their jobs from home. They could communicate online. 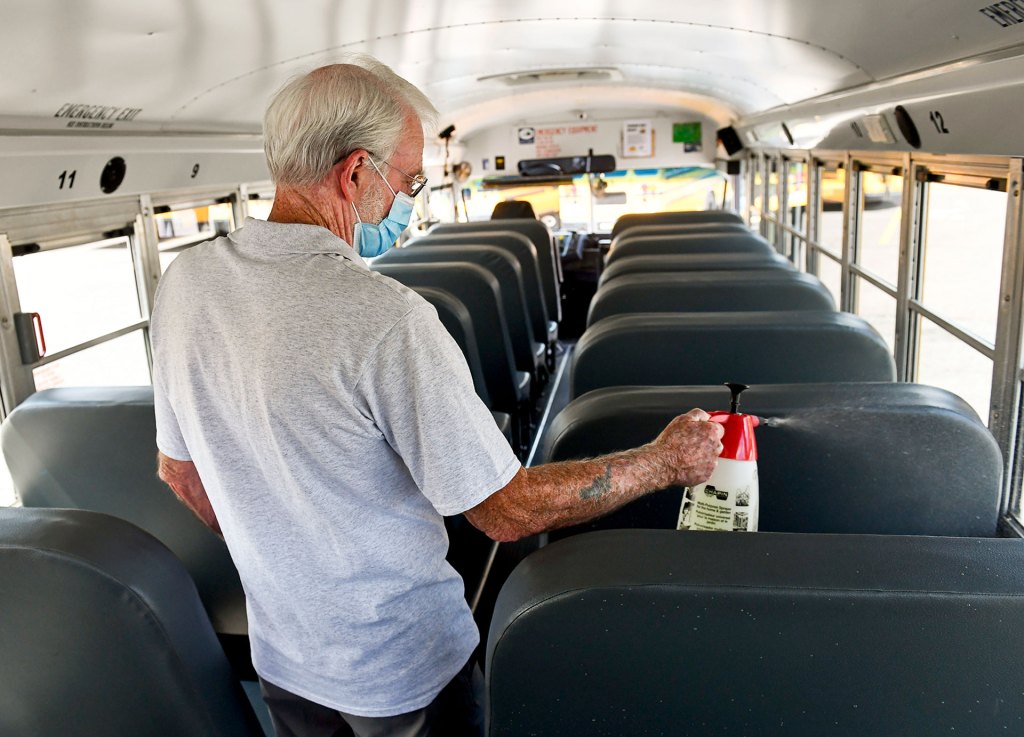 BACK TO WORK A driver in Robeson Township, Pennsylvania, readies a bus for students by spraying sanitizer.

But others, including workers in restaurants, shops, and hair salons, could not. By late May, more than 40 million people in the country lost their jobs. Unemployment hit Black and Hispanic workers hardest. According to research from McKinsey & Company, about a quarter of the small businesses in the U.S. could close for good because of the effects of the pandemic.

On March 27, the Coronavirus Aid, Relief, and Economic Security (CARES) Act was passed by Congress and signed by President Trump. It would cost the country more than $2 trillion. 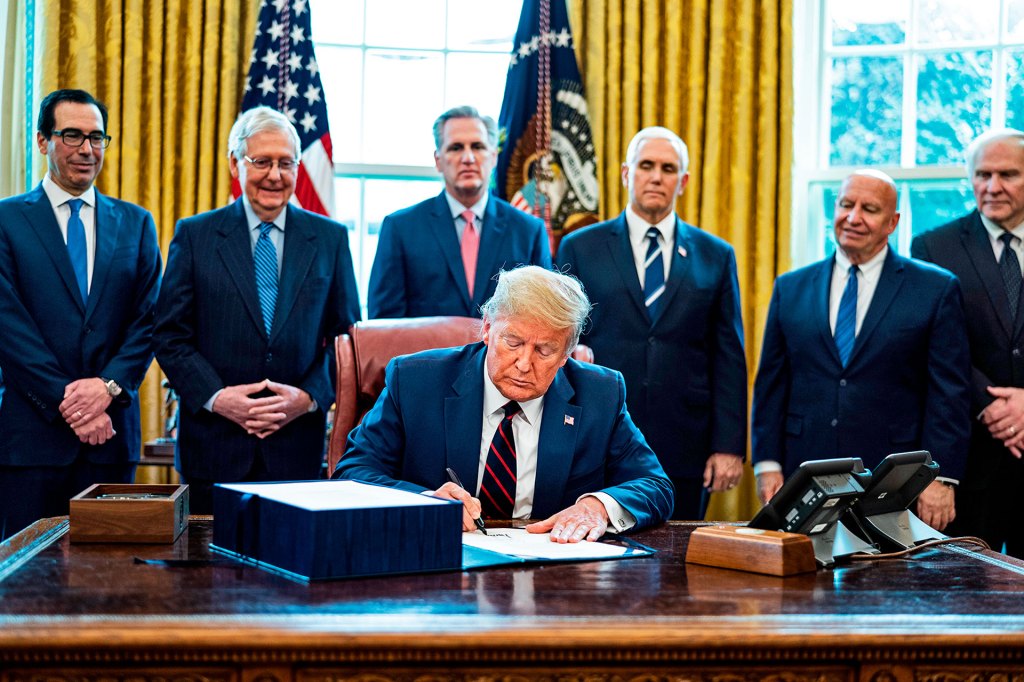 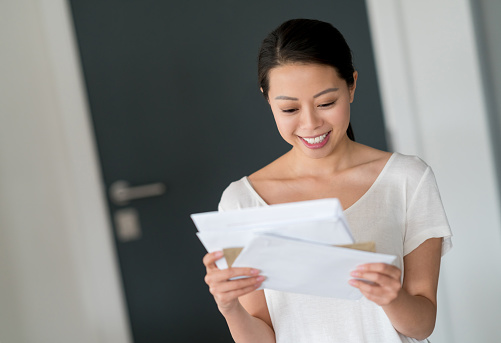 ANDRESR—GETTY IMAGES money given to people to help stimulate, or grow, the economy (noun) The government sent stimulus payments by mail to eligible Americans. were sent to adults who earned less than $99,000 a year. Some mortgage and student loan payments were paused. Landlords weren’t allowed to evict renters who were unable to pay. 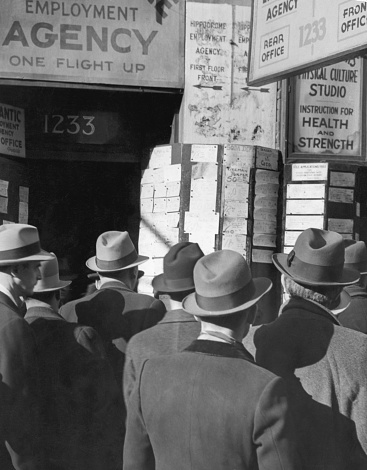 BETTMANN—GETTY IMAGES the state of not having a job; the rate of how many people don't have jobs in a country (noun) During the Great Depression, unemployment in the United States was very high. payments, which are typically provided by the state, were supplemented supplement 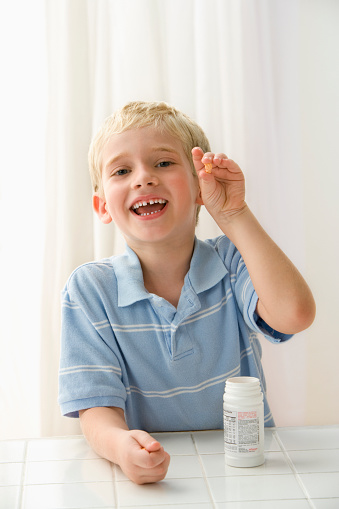 JOSE LUIS PELAEZ INC./GETTY IMAGES to add to (verb) I take vitamins to supplement my diet. with money from the federal government. The rest of the money from the CARES Act was marked for public services, such as education and public health.

So where does the economy go from here? In May, June, and July, the country restored millions of jobs that were lost earlier in the year. Many were in such businesses as restaurants and hotels. Consumers started spending more in May and June, as well. They bought clothes and shoes, dined out, and rescheduled appointments that they’d postponed. But in July, cases of COVID-19 continued to rise.

Consumer confidence—a monthly survey that measures how Americans feel about the economy and predicts their spending—dropped again.

In August, as this story was being written, Congress and the president were negotiating another act to help Americans. The results of those negotiations are not yet clear. What is clear, however, is that the health of the country and the economy go hand in hand.